Maria Sharapova, in a very ‘classic’ car pose, as brand ambassador for Porsche

We celebrate International Women’s Day on 8th March and this year’s theme is ‘Inspiring Change’ so it was with great interest that I read a piece on the ‘new’ female consumer in Marketing Magazine which led me to think about how automotive retail appeals to its female customers and how well represented they are in the workplace.

Firstly, I would recommend reading Marketing Magazine’s article http://www.marketingmagazine.co.uk/article/1282888/brands-know-new-woman-consumer although I don’t think the ‘new’ female consumer is particularly new, writer Jane Bainbridge’s observation that she is ‘much more powerful and multifaceted than many brands and creatives seem to give her credit for’ is true enough.

Women now make up 40% of the UK’s car drivers, according to a report in The Telegraph, sitting behind the wheels of some 10 million vehicles (in the US, figures show 65% of car buyers are female) and there are 16.3 million female driving licence holders in the UK compared to 19 million men. It stands to reason, then, they should be well represented both in the way manufacturers advertise their products and in the showrooms and aftersales departments where we buy and service our vehicles. So how well are we doing?

We hit a milestone in January when Mary Barra took up the role of CEO at General Motors, making her the first automotive manufacturing chief. 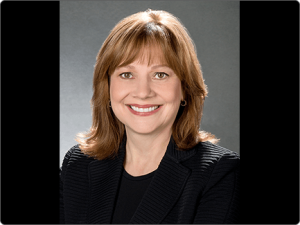 Mary Barra, GM’s new CEO, a first for the industry

However, women made up just under 21% of employees in car manufacturing in the United States, and 16% of executives and senior management, according to a 2010 Equal Opportunity Employment Commission report. Statistics from our own government’s National Careers Service show 19% of the UK’s engineering workforce (including automotive manufacturing) is female with 17% of engineering management roles undertaken by women and just 7% of professional roles.

Women employees only outnumber their male counterparts in administrative and secretarial jobs when it comes to car retailing, according to the Institute of the Motor Industry Skills Priorities for Automotive Retail Sector 2009. A staggering 70% are female compared to other positions including managerial and professional where women occupy just 14% of these roles.

The statistics may not make the best reading, especially on the eve of International Women’s Day, but there are plenty of examples of women taking on top, tough roles in the industry. The IMI Magazine’s article http://www.motor.org.uk/magazine/articles/cover-feature-a-women-s-world-not-quite-michael-100.html reads a bit like a who’s who of women in the sector, although somewhat out-of-date, encouragingly many of those mentioned have since moved onwards and upwards.

Personally, I have worked with a number of women who are undertaking managerial roles in the automotive retail sector such as Diana Mackinnon, general manager at Lexus Edgware Road; Tracey Perry, managing director of Volvo group of dealerships Regent Automotive; and Lisa Ford, UK operations director at Mana Premiere Automobiles.

There’s no doubt, we all have a role to play. I like to think I do my bit. I try to ensure women in the industry are represented at industry magazine AM’s conferences. Lisa spoke at AM’s Digital Dealer Conference last year; Christina Ewbank, who at the time headed up Mercedes-Benz Eastbourne and Brighton at Lookers Plc before taking up her role as chief executive at Eastbourne’s Chamber of Commerce, spoke at AM’s Hit For Six Conference in 2012; and Lifestyle Europe’s HR manager Helen Farrow will be speaking at the forthcoming Aftersales Conference on 8 April.

In some ways automotive retail can be less of a barrier for women than many other industries – most of the people I have met are looking for the best people for the job and are less likely to be swayed by colour, greed, gender or a graduate education.

For an overview of women and the automotive industry read the article by Kirsty Cooke, content editor at Arnold Clark, the third largest dealership group in the AM100. A fantastic walk-through history of women in automotive from Mary Anderson, inventor of the windscreen wiper in 1902, to a host of facts, figures and survey snippits which reflects the perception of women in advertising and their contribution to the industry http://www.arnoldclark.com/newsroom/073-women-in-the-car-industry – it’s a great read.

Whether or not the industry is successful in marketing its products to the powerful female consumer as outlined in Marketing Magazine’s article is quite another thing. Certainly, there is still no shortage of good-looking, young women ready to help at the worlds’s car shows. Many manufacturers have appointed female celebrities to launch their vehicles in recent years – Kylie Minogue was the face of the Lexus CT 200h in 2011, Victoria Beckham worked with Land Rover to create a special edition Evoque in 2012 and just last year tennis star Maria Sharapova became a ‘brand ambassador’ for Porsche. Although to which gender these female icons are more likely to appeal is debatable.

There is, without doubt, more work to be done and, arguably, with increasing numbers of women on the road, a greater representation of females at work in automotive retail is good for business.

Come International Women’s Day, we should celebrate our successes but remember there is still a long way to go. As Adrian Bailey MP, chair of the Business, Innovation and Skills Committee, said on the publication of its report in June last year highlighting the under representation of women in certain industry sectors: “Four decades since the Equal Pay Act, we still do not have full workplace equality.  We cannot wait another 40 years.”