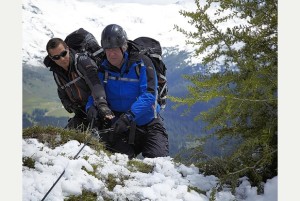 Unlikely bedfellows TV presenter, writer and all-round brain box Stephen Fry and adventurer and survival expert Bear Grylls teamed up for a Christmas Day special on Channel 4 which saw Fry climb down a 500-foot waterfall, sleep in a World War I trench and abseil a sheer cliff face. Grylls’ objective to take Fry far away from his comfort zone was certainly achieved but what was surprising was the clearly unfit and overweight 56-year-old Fry taking such physical and death-defying challenges in his stride, even if it did leave him a little out of breath.

Were we watching mind literally over matter unfolding before our very eyes?

Fry’s quick wit and high intelligence as well as his battle with the inner demons of depression are well documented. The link between genius and insanity is also a widely debated topic with perhaps the most famous example being the artist Vincent Van Gough who attempted to cut off his ear, was treated in an asylum and eventually shot himself whilst producing some of the greatest works of the 20th century. So do you have to be in possession of a truly great mind and possibly be a little crazy to achieve such huge feats?

Not that I am suggesting Fry is completely insane. Although watching him peer nervously as a roaring waterfall cascaded beneath his feet prior to attempting his descent and then glancing unbelievably over the top of a sheer drop before abseiling down, it would be fair to argue, displays a hint of madness. What was overwhelmingly apparent was Fry’s sheer determination to face anything and everything Grylls decided to throw at him.

As 2013 draws to a close and 2014 beckons, many of us will be drawing up a list of New Year resolutions or giving ourselves a goal or two for the coming 12-months of which some of us will achieve and others, for one reason or another, one obstacle or another, will not. The question is: is it simply a question of mind over matter? Will those with a greater resolve, more willpower and ultimately a more powerful mind be more likely to succeed?

Greater minds than most have explored that question and undertaken extensive research without managing to come up with a definitive answer.

Perhaps, though, we are missing the point. It wasn’t Fry’s single mindedness, fortitude, courage and resilience, impressive and admirable though it obviously was, which was the determining factor in his success but the encouragement and unshakeable belief in his ability to achieve that which seemed clearly impossible from Grylls which was decisive in the outcome. In fact, Fry paid homage to Grylls’ unprecedented support which he acknowledged was paramount in his achievement.

So rather than drawing up the required but half-hearted list of New Year resolutions which we know we’ll conveniently forget in the first few weeks of January, we should resolve to give our unparalleled support to our children, partners, friends and colleagues in 2014. By so doing, it is entirely possible and significantly more plausible that we will all achieve so much more.

Inspired by my friend Louise Hillman Jones who, like many, faces a seemingly uphill battle in 2014, with determination, love and support, you will succeed.

One thought on “Mind Over Matter?”